Betty Jean Reed was the only black student to attend Granby High School in 1959, a sophomore.

In spite of serious health problems, Betty was interviewed for a 2004 story in the Washington Post.*

Were they very difficult, those years at Granby? "Oh, yes," she was able to say, closing her eyes for a moment.

In this article, Betty is remembered by a white former Granby student, Eleanor Shumaker, who taught school in DC. Since 1978, Shumaker has told her classes about Betty Jean and about the shame she feels for how she treated her. Shumaker feels ashamed about the 1961 "private prom at her Norfolk high school, designed to exclude the school's only black student. She talks, with regret, about how she was afraid to object, afraid to reach out to her classmate who had endured taunts and threats and isolation.

"Betty's older sister, Celestine, said that "They weren't that mean-spirited with her, but we could never take any chances" ... "It wasn't the school, really, it was the parents who were mean. They'd come up to say things to her, like, 'Go back to Black Town.' "But we never took it personally because we were always church people"....

Reed married and goes by the name Jean Kea. She lives in DC, but is very ill after an aneurysm in 1987 that ended her career as a social studies teacher. She was able to attend some of the events for the 50th anniversary, including the discussion with 10 members of the Norfolk 17 filmed for WHRO's The Norfolk 17: Their Story. 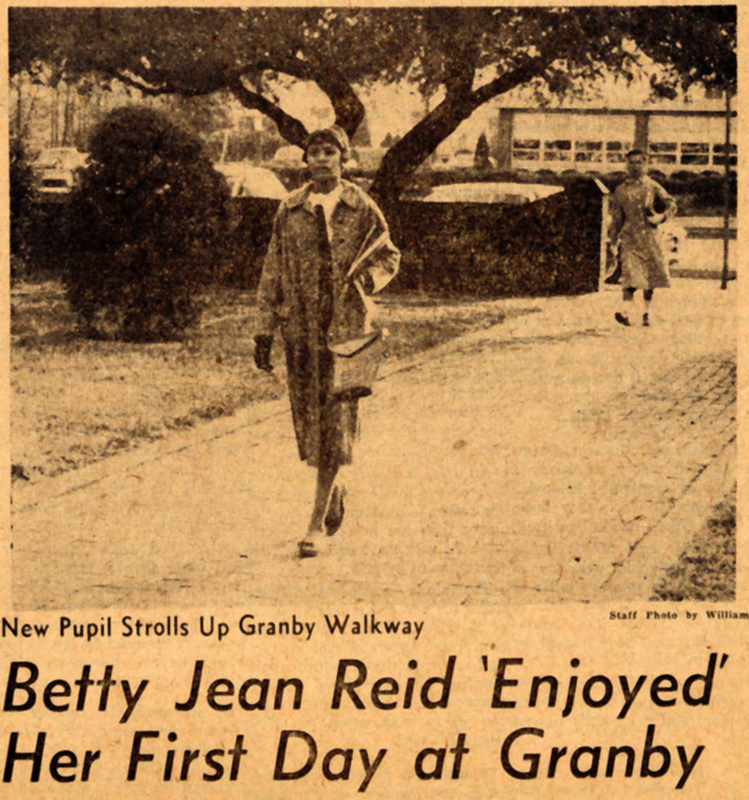 Betty Jean Reed arriving at Granby for her first day of school, February 2, 1959.