Louis Cousins was the only black student to attend Maury High School in 1959 at 15 years old. He graduated in 1962.

The other members of the Norfolk 17 referred to Louis as "the professor" because of his intelligence. As witnessed in a much-publicized photograph (see below), he too was ostracized. The photograph shows Maury's large auditorium with Louis Cousins isolated from the rest of the students.

An article in the San Antonio Express-News* talks about how Cousins felt alone as he entered the school on his first day, amid "curious stares--and silence."

"This school was totally white, all white students," he said. "The only thing that might have been black was the staff that did the floors."

Aside from the isolation, Cousins - like the other Norfolk 17 children - also endured taunts. He recalled students would sit on the brick wall around the school before classes began and hurl insults as he walked by.

"We were called tar baby, nigger, Sambo in the hallways," recounted the 60-year-old Cousins.

At his home, tormenters broke out windows and once burned a cross in his front yard to "symbolize the KKK," he said.

The only time he lost his composure, Cousins recalled, was when a student spat on him. Cousins chased the classmate down the hall and into the principal's office. The student later was suspended.

About the Norfolk 17, he believes that "we were there for a purpose... We were there to open the doors not only for ourselves, but for our race."

After high school, Cousins joined the Air Force and worked as a medic in Vietnam. He moved to San Antonio, Texas and retired as a medical technician.

In 2009, Louis Cousins returned to Norfolk and spoke at a ceremony honoring the Norfolk 17 and the 50th Anniversary of the opening of the schools. A Virginian-Pilot article (Hundreds walk to show how far we’ve traveled by Scott Harper) reported on the Unity March and Cousins' speech:

Cousins corrected those who alleged that Norfolk’s integration was fairly calm compared with those in other Southern states – “I can tell you it was anything but peaceful.”

He thanked the city of Norfolk for sponsoring a Massive Resistance commission, though he noted it has taken “50 years to finally get some of the facts out.” 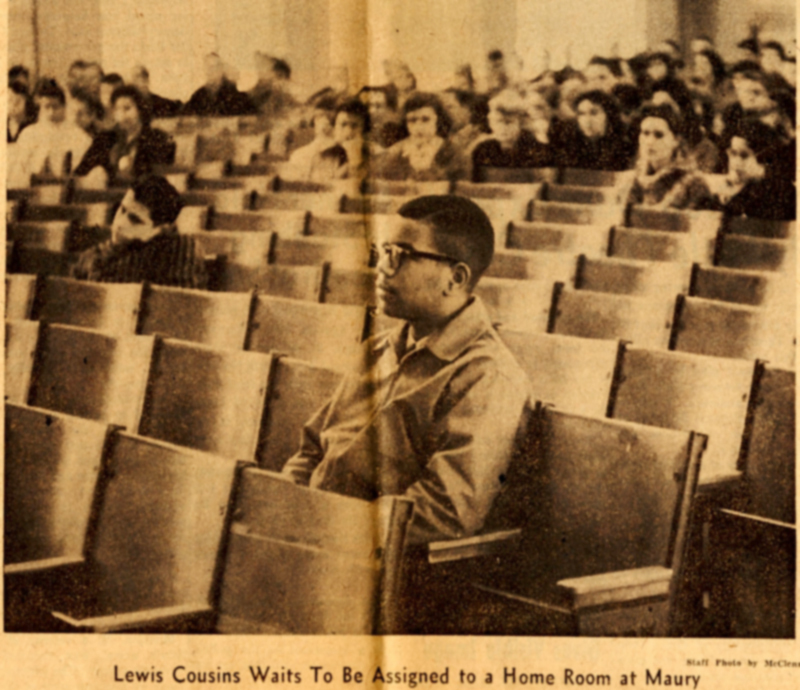 Iconic photograph of Louis Cousins ostracized in the Maury auditorium on his first day of school, Feburary 2, 1959.