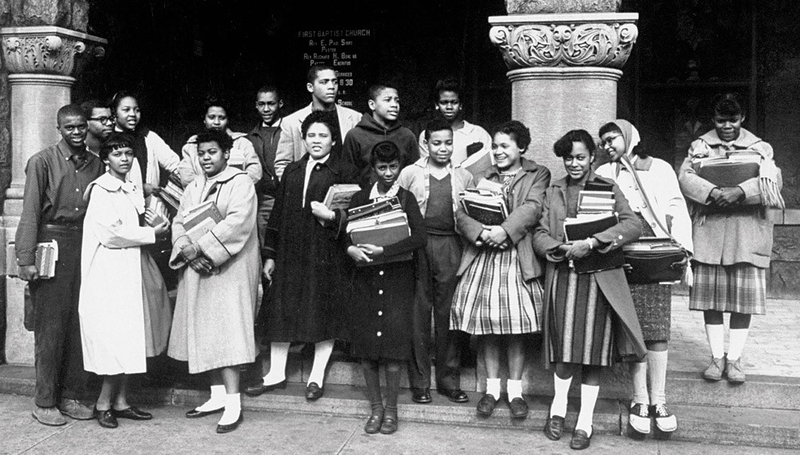 The Norfolk 17 outside First Baptist Church on Bute Street in Norfolk, VA

On February 2, 1959, 17 African-American students entered six previously all-white middle and high schools in Norfolk, Virginia. These schools had been closed for five months as the result of Virginia's massive resistance effort to avoid the desegregation mandated by the Brown v. Board of Education ruling in 1954. The white community was forced by federal and local courts to accept desegregation.

The "Norfolk 17," as they were called, sustained many hardships for the sake of integration so that other children would have more educational opportunities. They learned first-hand that the white schools had new textbooks, nice furniture, and impressive laboratory equipment, none of which they had at their schools.

Initially, 151 African-American students applied to the all-white schools. After intense testing and interviews, by September 1958 only 17 remained. When the governor ordered the schools closed, these 17 students, along with 10,000 other students, had to find other ways to continue their schooling.

At the First Baptist Church on Bute Street (pictured above) and at a church in Norview, they were trained "for sixteen weeks for their roles as agents of social change. Because nothing could be left to chance, they received instruction in deportment, in handling racial conflict, and in meeting the academic challenges" (Lewis, p. 203).

As they entered the schools for the first time, the Norfolk 17 relied on their training to deal with the racial conflict they encountered -- they were spat upon, called names, had things thrown at them, were tripped, and one girl was stabbed. They experienced physical and emotional abuse, while the local and national press reported that there was no violence as expected, and that "it was an eerily calm conclusion to one of the most difficult half-years Norfolk had ever endured" (Parramore, p. 375). In fact, the abuse didn't stop after the first day -- it continued for months and years.

While many of the students have tried to leave their experiences in the past, many have come forward to share their stories at various events and through interviews conducted as part of the 50th Anniversary commemorations in 2008-09. In 2002 the City of Norfolk finally honored them with medals for their bravery and courage. And in 2008, the Virginia General Assembly passed a resolution Commending the Norfolk 17 on the occasion of the 50th anniversary of their struggle to integrate the public schools of Norfolk.

The Old Dominion University Libraries wish to honor these 17 students for the sacrifices they made: "... without their 'voice' the story of Norfolk integration crisis will not be fleshed out. These individuals represent a crucial piece of the historical puzzle, and their story needs to be told, because until now historians have neglected their experience" (Nichols, p. 83n). As of January 2021, only nine of the 17 are still living.

Sources of information for sketches of members of the
Norfolk 17 presented on this exhibition:

← After the Schools Reopened
Louis Cousins →
THE NORFOLK 17