Lolita was interviewed for the documentary "The Other Face of Dixie" (1962). She said that what helped her get through this trying time was that she was treated well by the teachers.

Sam Ray, principal of Blair Jr. High School, recalled Lolita as "a girl who is now married and has children ... was a fine young lady. Both students adjusted beautifully." Ray stated that both Portis and Reginald Young "went on and finished at Maury and to my knowledge had no problems at Maury." About the teachers at Blair, he said "the faculty and I had discussed it at length and we had decided that we were going to create an atmosphere in the school which would be conducive to having minority students and be comfortable and frankly that's what we did." About Norfolk's school desegregation, he said it "really went very smoothly .... There really weren't any problems to amount to anything."*

But 50 years later, from her home in Nevada, Lolita told a fellow Norfolk 17 member that she has wanted to forget about that time. She never even told her children about the pain she experienced.

In a 2008 Virginian-Pilot article** from her home in Las Vegas, Lolita is quoted as saying: "I didn't know there was that much hatred until I put my foot on that property." Of the harrassment she endured, "she was told by workers with the National Association for the Advancement of Colored People never to talk about the harassment. They feared that if the 17 complained, the board could have reason to halt the desegregation plan." Contrary to what the Blair principal said, the article reports that for Lolita, "Things weren't much better when Portis-Jones moved to Maury in 1960. She always feared for her safety at the end of the school day, and her grandfather and uncle timed her walk home; being late could be a sign of trouble. By age 15, she had developed her first stomach ulcer due to stress. She says she had another before she graduated." 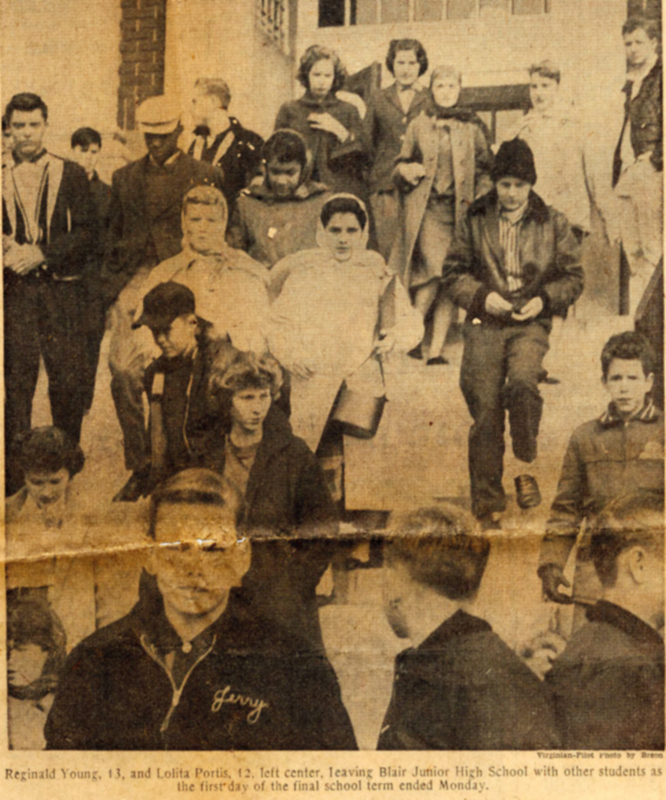 Reginald Young and Lolita Portis leaving Blair Junior High School with other students on the first day of school, February 2, 1959.