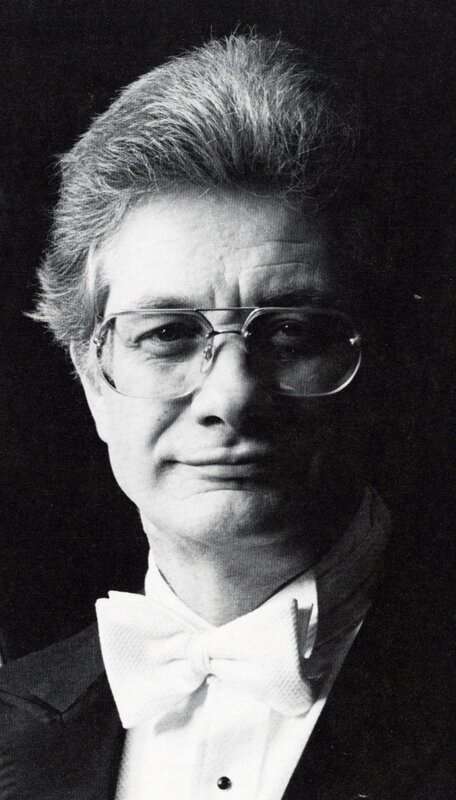 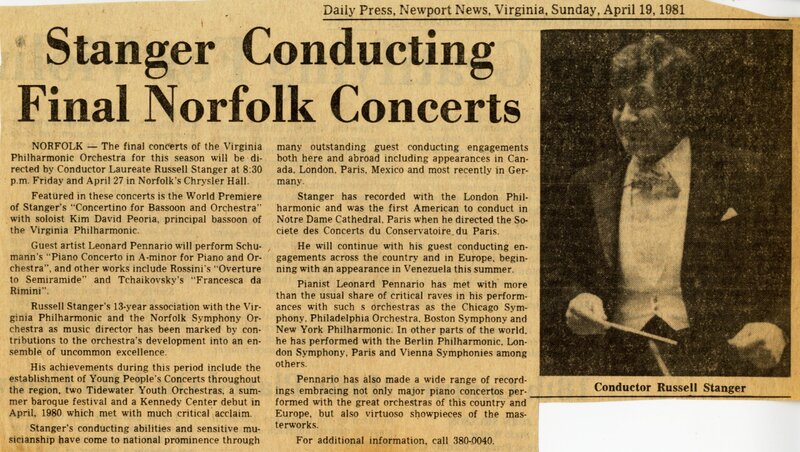 As conductor laureate Stanger was invited to guest conduct what was then the Virginia Philharmonic Orchestra for the closing of the 1980-81 season. 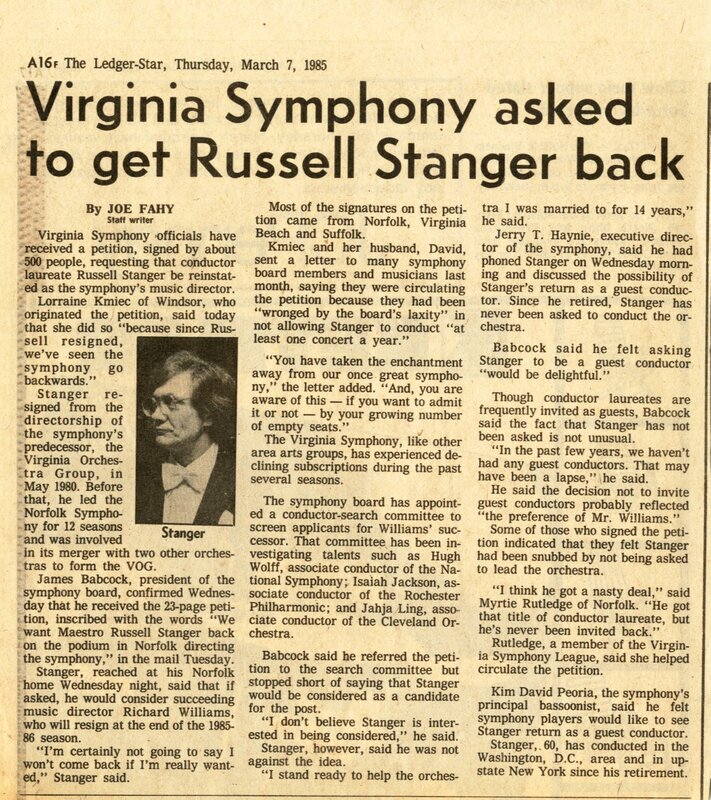 By the mid-80s there were many in Hampton Roads who wanted to see Stanger return to the Virginia Symphony full-time.

As conductor laureate it was expected that Stanger would return as guest conductor with the Virginia Symphony at least once a season, which he did in the final concerts of the 1980-81 season, but after that there would be no further invitations during the tenure of Stanger's successor, Richard Williams. By the mid-80s there were many in Hampton Roads who wished for Stanger's return as full-time director. After Williams left at the end of the 1985-86 season Stanger began appearing again as guest conductor of the Virginia Symphony as well as other orchestras in the Tidewater area, including the Williamsburg Symphony. Guest appearances continued well into the 1990s. 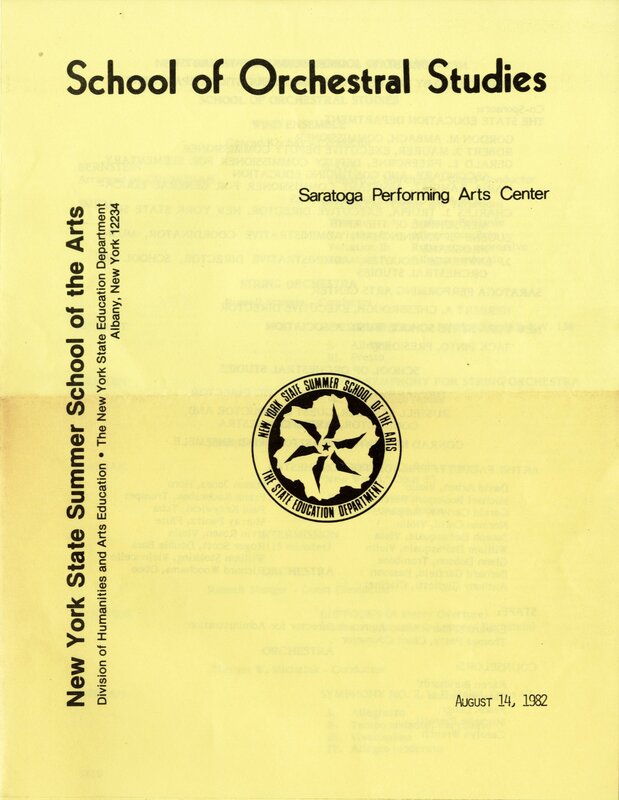 Program cover for the School of Orchestral Studies at New York State Summer School of the Arts (NYSSSA), 1982. 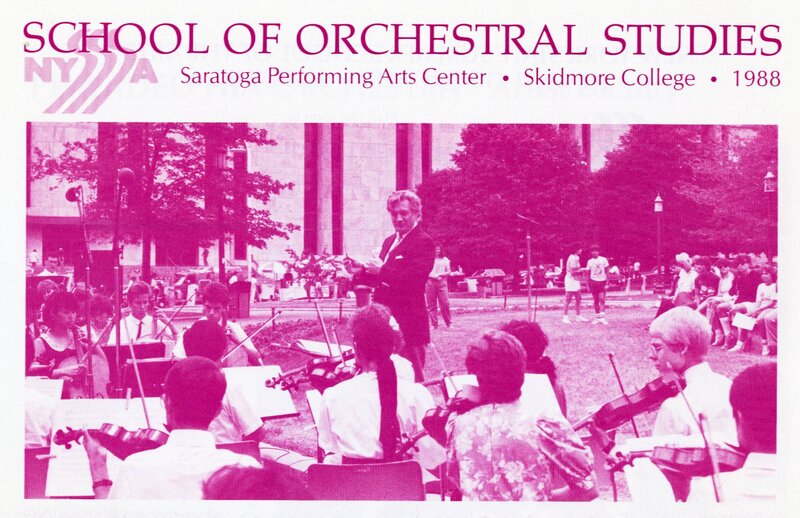 Stanger appears on this NYSSSA leaflet from 1988. 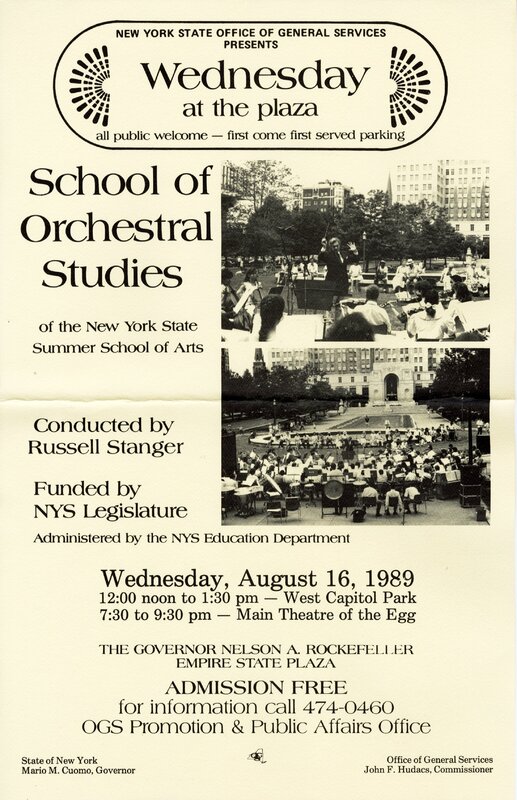 In 1982 Stanger was invited to join members of the Philadelphia Orchestra as orchestra director for the School of Orchestral Studies of the New York State Summer School of Arts held at the Saratoga Performing Arts Center. The following year he was appointed Music Director of the NYSSSA SOS. Stanger returned to Saratoga in this capacity each summer for the next 24 years. 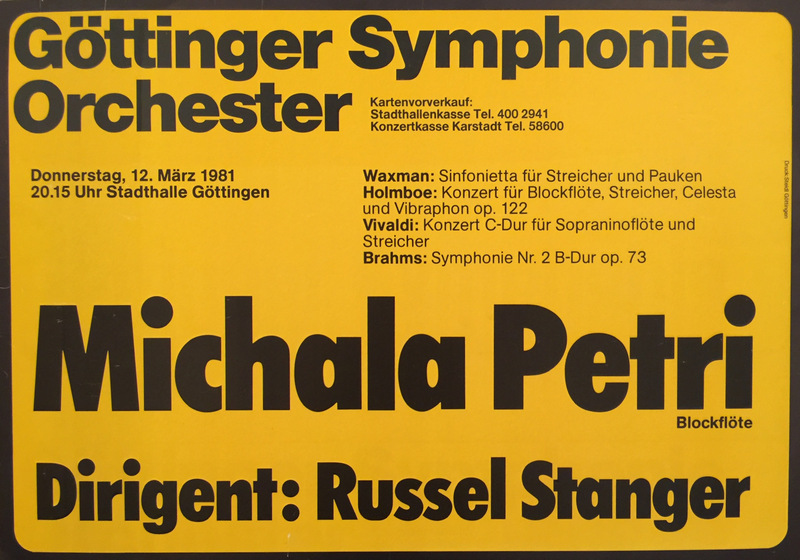 Poster for Stanger's guest appearance with the Goettinger Symphony Orchestra in 1981. 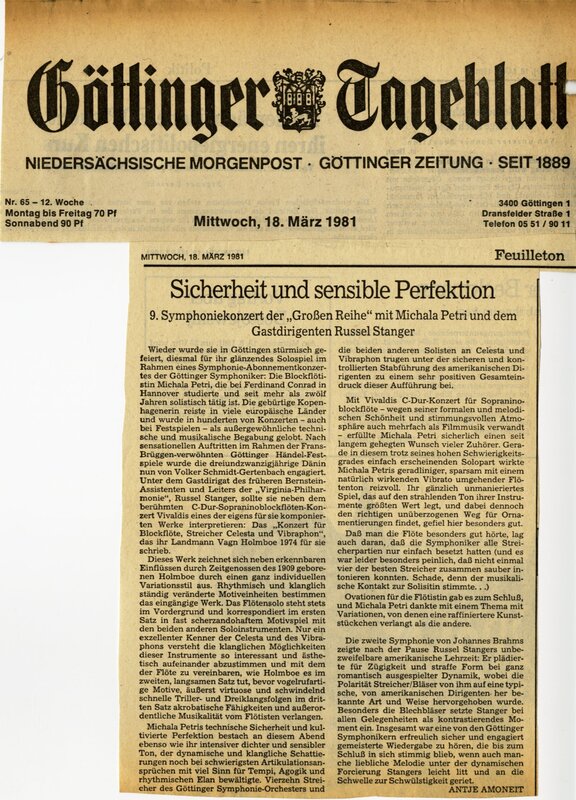 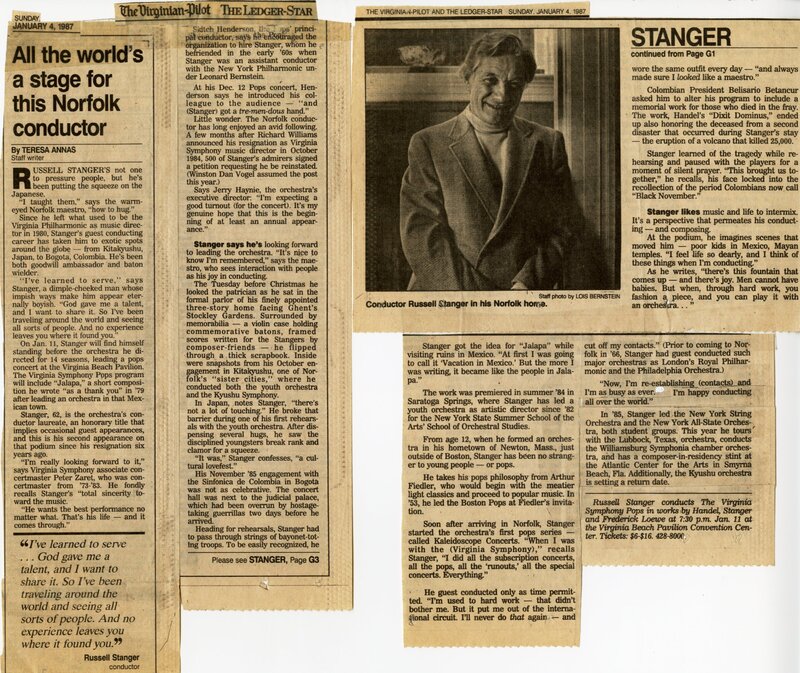 Article about Stanger's international conducting appearances during the 1980s, The Virginia-Pilot (1987). 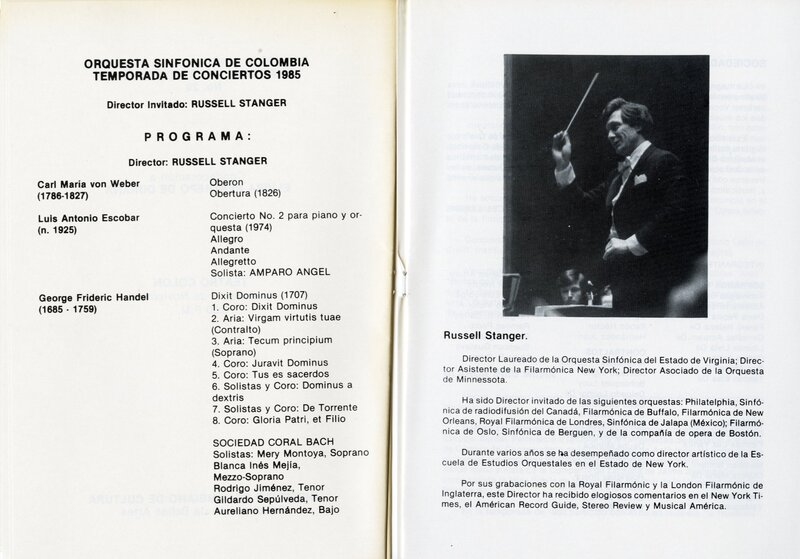 Program from Stanger's 1985 engagement with the Columbia Symphony Orchestra, Bogata. 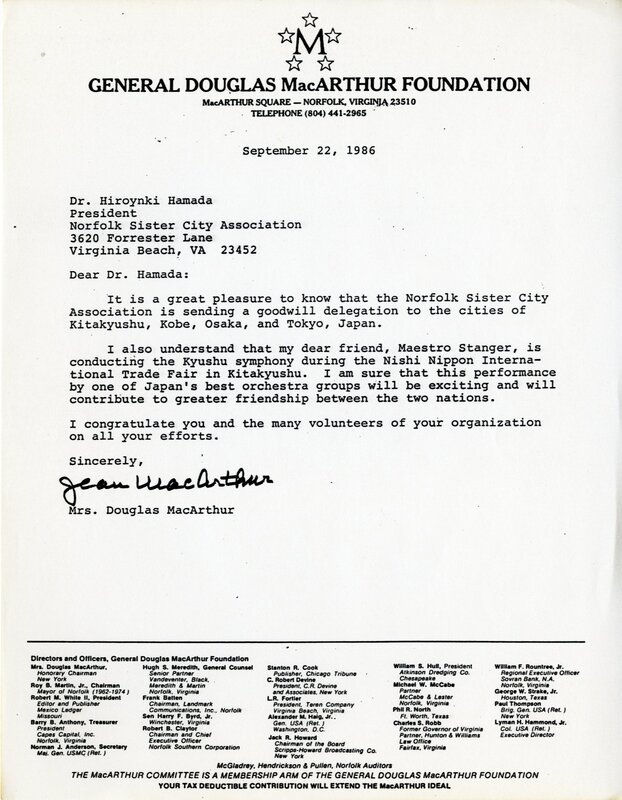 A letter from Mrs. Douglas (Jean) MacArthur wishing Stanger and a delegation from the Norfolk Sister City Association well as they prepare to embark on a a goodwill visit to Japan, where Stanger would conduct the Kyushu Symphony in the autumn of 1986. 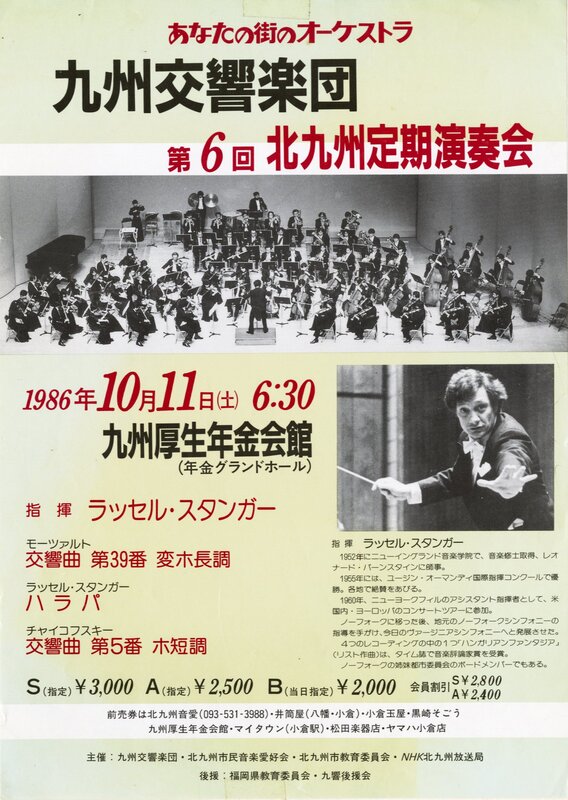 Poster for Stanger's October 11 performance with the Kyushu Symphony Orchestra (1986).

Stanger would continue making international guest conducting appearances through the 1980s and 90s, including performances in Goettingen, Germany (1981); Bogata, Columbia (1985); and Kitakyushu, Japan (1986), the first of many trips to Stanger made to Japan. 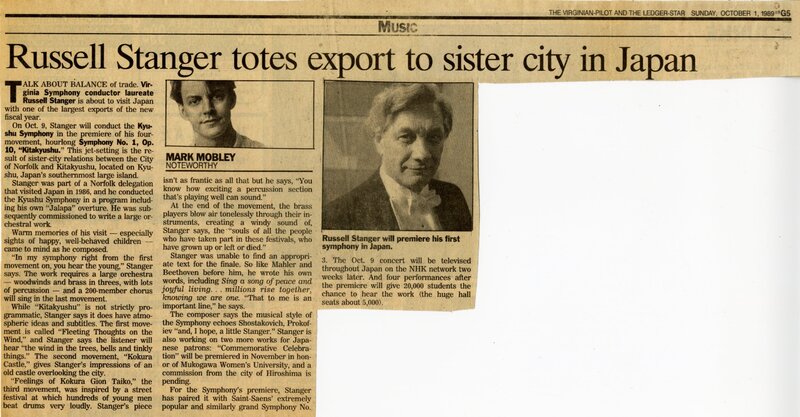 Article about Stanger's return to Kitakyushu, Japan, to conduct his Symphony No. 1, "Kitakyushu" with the Kyushu Symphony Orchestra (1989). 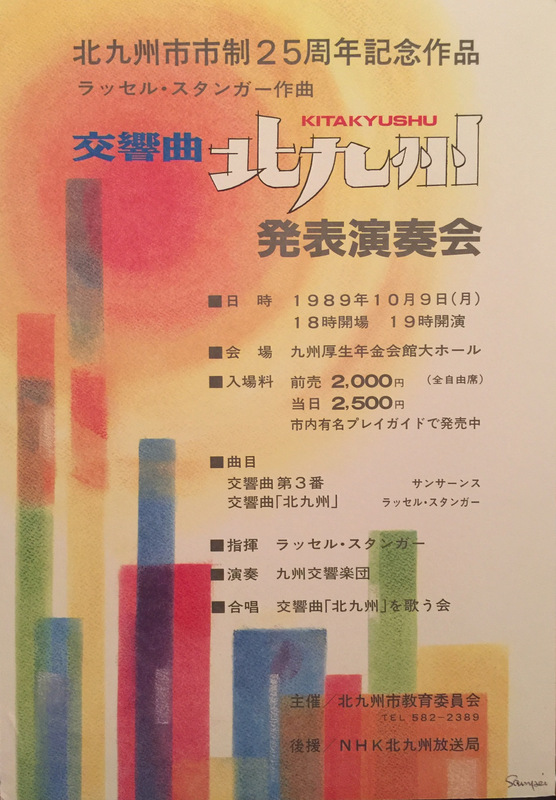 Poster for Stanger's October 9, 1989 performance with the Kyushu Symphony Orchestra. 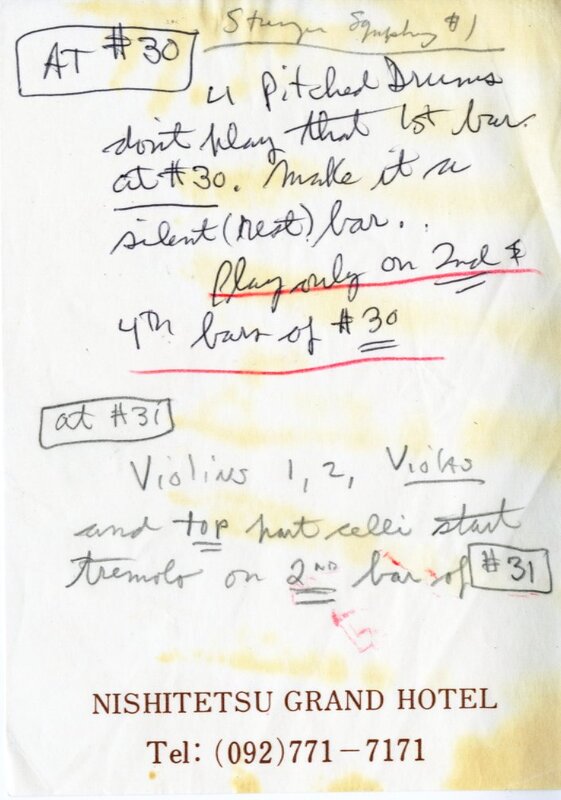 Performance notes Stanger made while preparing the Kyushu Symphony for the premiere performance of his Symphony No. 1.

In 1989 Stanger returned to Kitakyushu to conduct the Kyushu Symphony Orchestra in the world premiere performance of his Symphony No. 1, Opus 10, "Kitakyushu." Program notes for this work begin with the following:

"The work consists of four orchestral movements which in themselves are a series of tone poems reflecting my deep impressions of Japan. While the movements do not embody a strict form, they do suggest the late 19th and 20th century symphonic format which has undergone many changes in our present day.

"...the symphony ends with the chorus singing: "Seek Life's great love, World of Brothers, World of Sisters! All are One!"