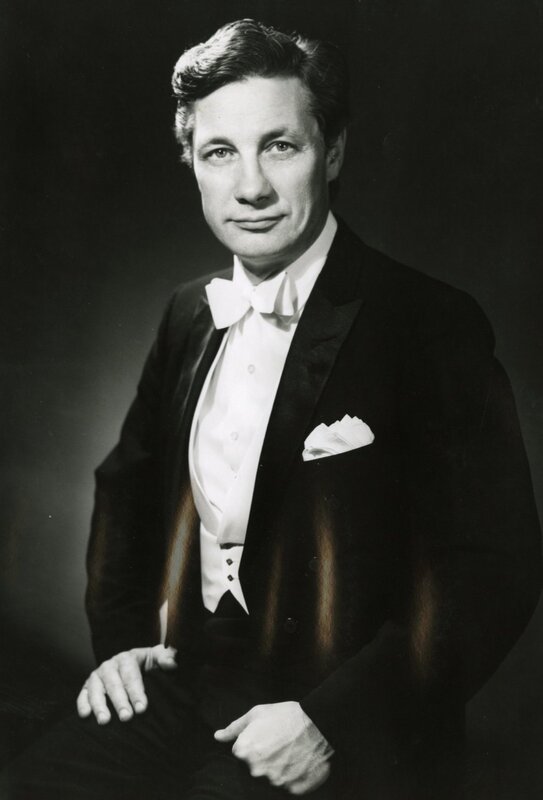 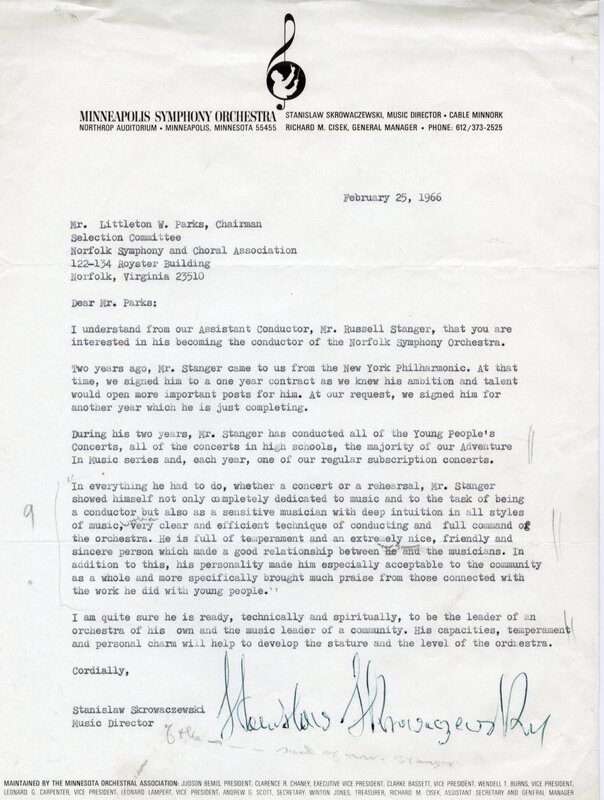 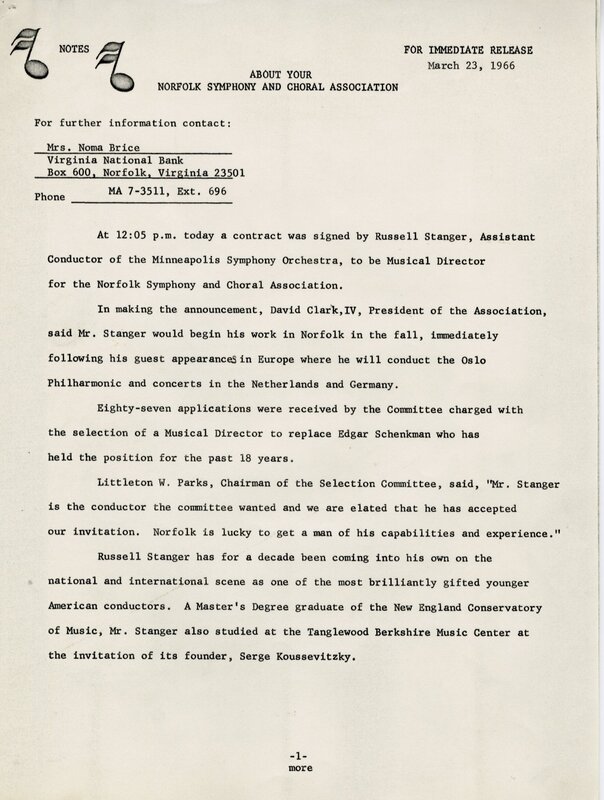 Press release from the Norfolk Symphony and Choral Association announcing the hiring of Russell Stanger. 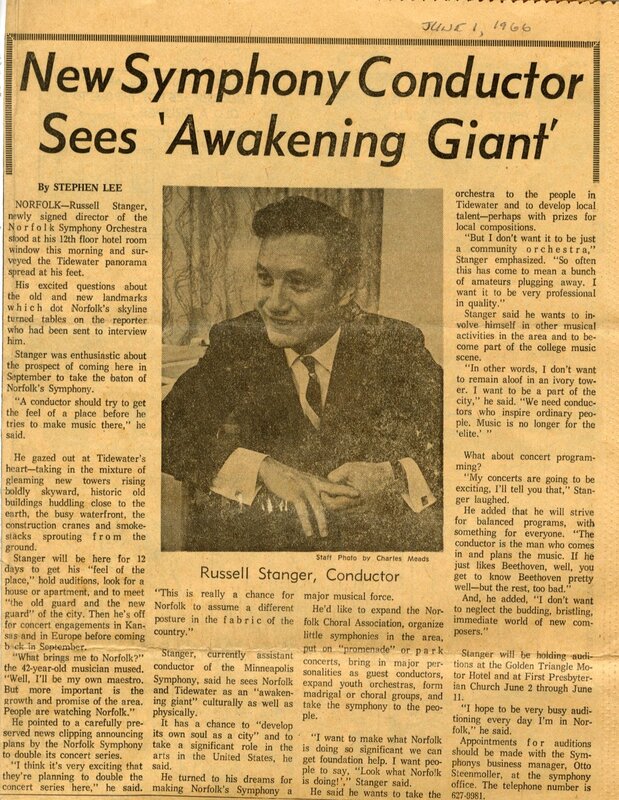 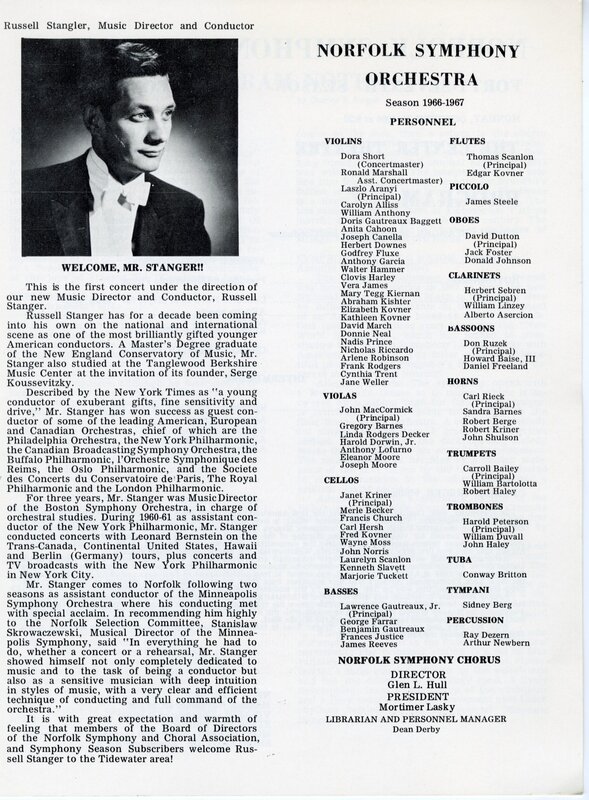 Page from the concert program of Stanger's first appearance with the Norfolk Symphony, October 24, 1966.

In January 1966 the Norfolk Symphony and Choral Association announced their search for a new music director for the beginning of the 1966-1967 season. Stanger submitted a letter of interest and in March it was announced he had been selected out of 87 applicants to replace Edgar Schenkman, who had conducted the symphony for eighteen seasons. 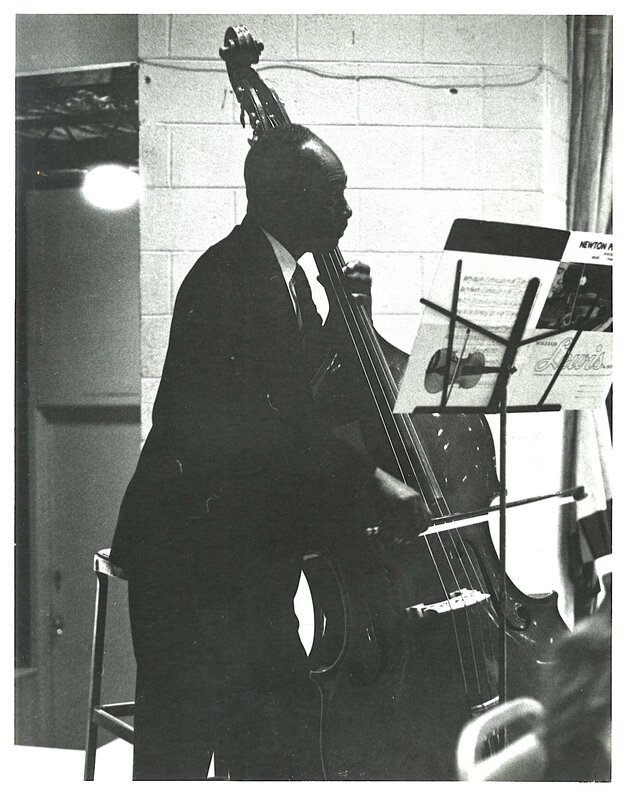 James M. Reeves was the orchestra's first Black member, joining in the fall of 1966 and entering at the back of the double basses. The Norfolk Symphony (and its audience) were not integrated until the appointment of Stanger, who insisted on open auditions. Reeves recalls, "I had tried out under Edgar Schenkman, who said 'You play all right, but you don't play head and shoulders above everyone in the orchestra, so I can't justify taking a black into the orchestra.'" Reeves got a frosty reception at his first rehearsal. "I felt like I was ostracized by just about everyone in the orchestra,'' he said. "Nobody talked to me except the first bass player when he told me what to do. It took, I guess, a year or so before people seemed to have warmed up to me.'' Reeves quickly worked his way up to principal, a post he held until his resignation in 1981. 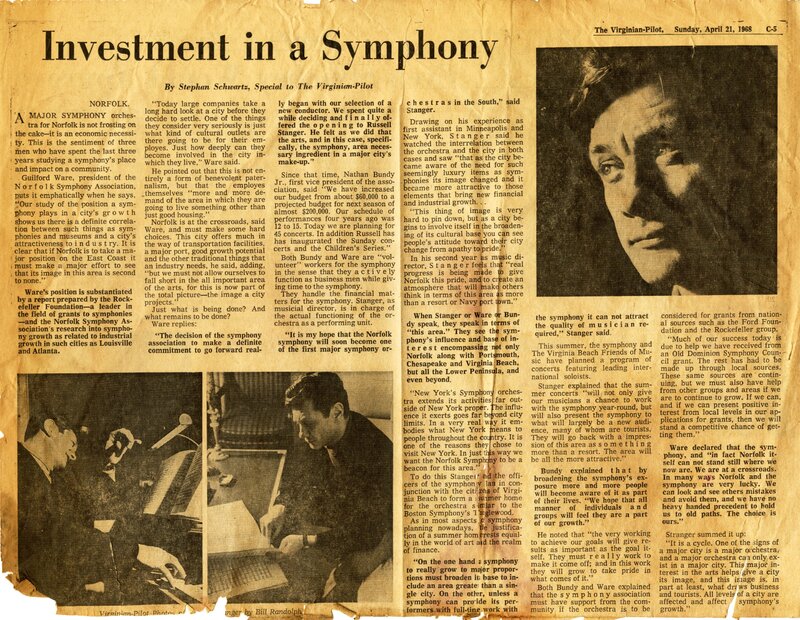 Insight into the hiring of and expectations for Stanger, Virginia-Pilot, April 21, 1968.

Stanger was brought in not only to conduct the symphony, but to bolster Norfolk's performing arts scene. This article makes the case for how a strong symphony orchestra can impact a community. 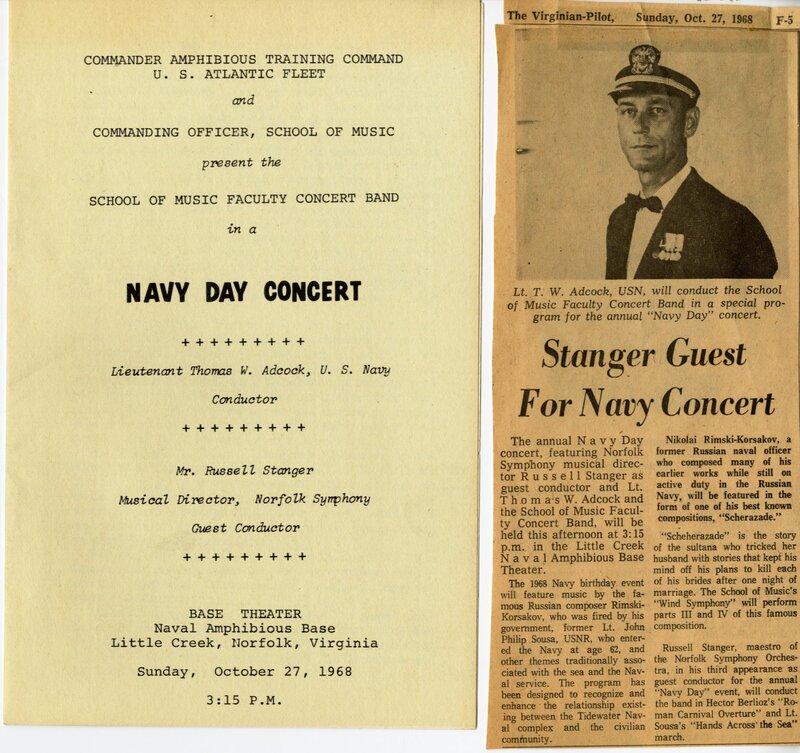 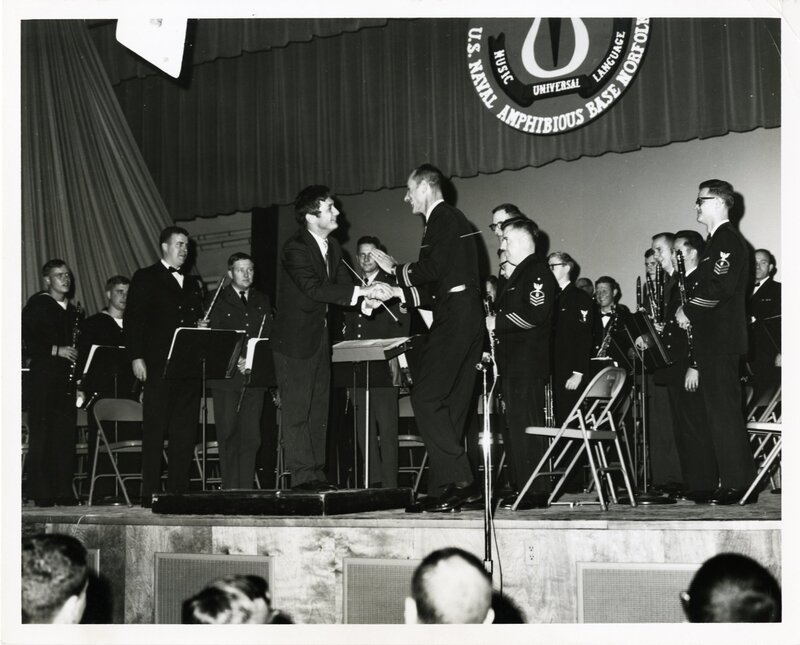 Stanger was keen to engage local organizations, including the military. In 1968 Lt. Thomas W. Adcock of the US Naval Amphibious Base in Norfolk to conduct the School of Music Faculty Concert Band for their annual Navy Day performance. Stanger, himself a US Navy veteran, was welcomed back multiple times during his tenure with the Norfolk Symphony. 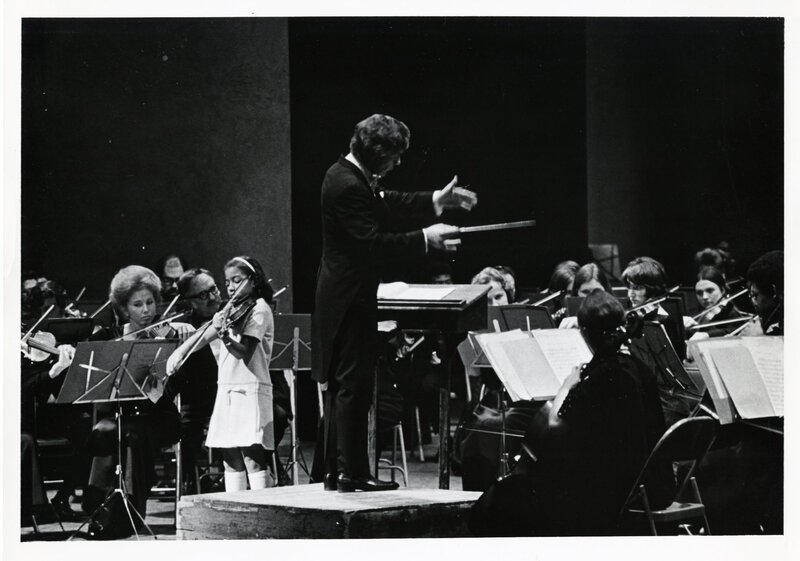 11 year-old violinist Cecelia Hobbs in performance with the Norfolk Symphony, 1970. 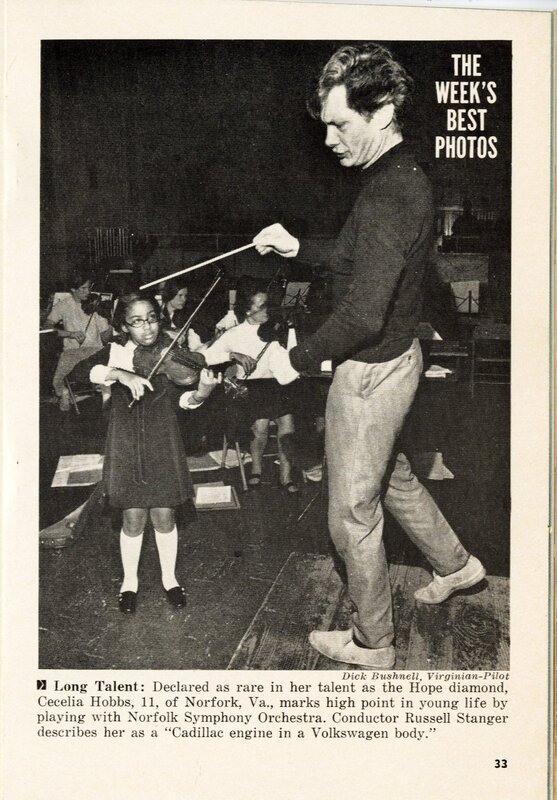 This photo of Stanger rehearsing with Miss Hobbs appeared in Jet Magazine, January 21, 1971.

Eleven year-old violinist Cecelia Hobbs of Newport News appeared as guest soloist with the Norfolk Symphony in the autumn of 1970. Hobbs (later Cecelia Hobbs Gardner) went on to graduate from Juliard and had a successful freelance carreer in New York City. 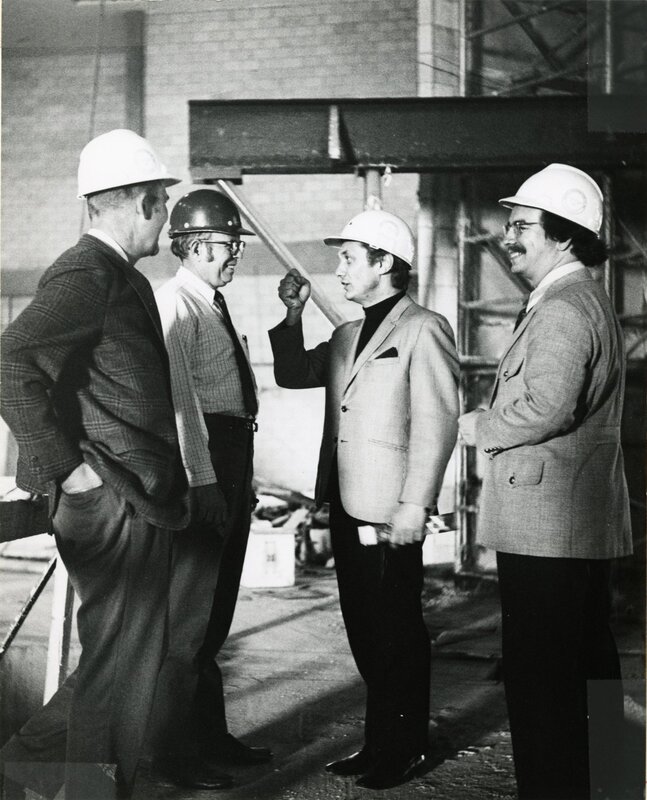 Stanger tours the construction site for the Scope and Chrysler Hall. 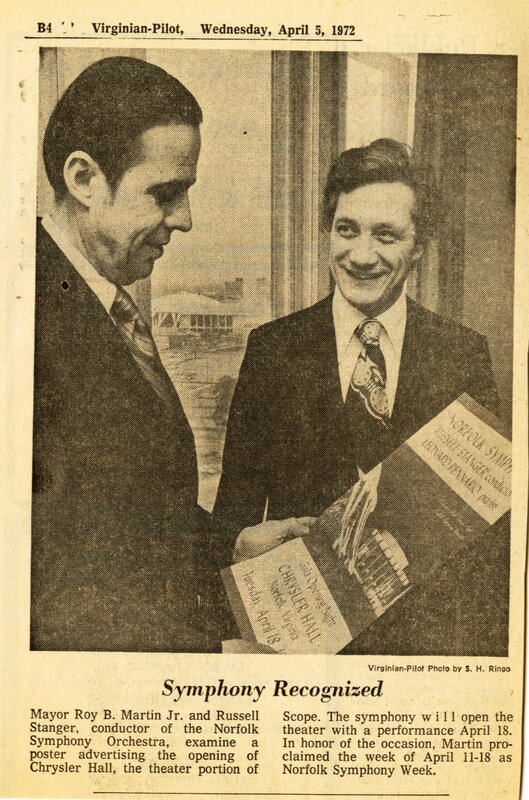 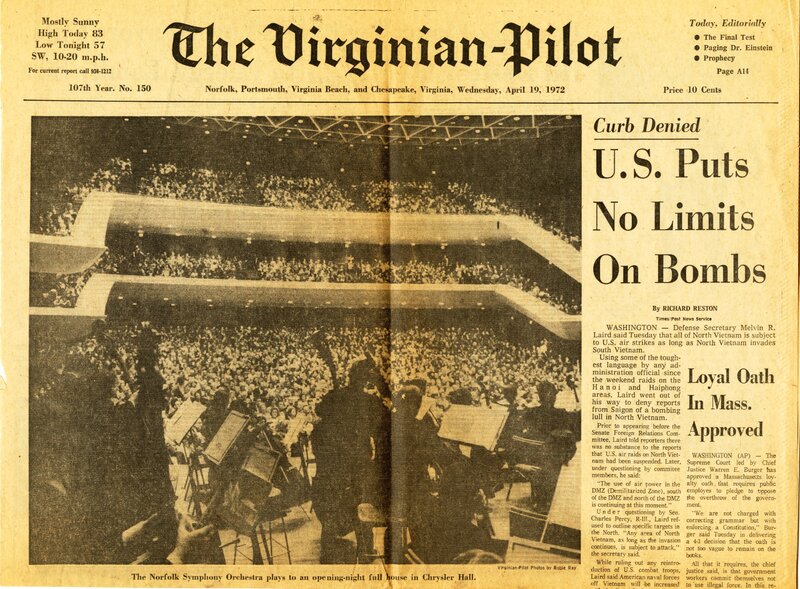 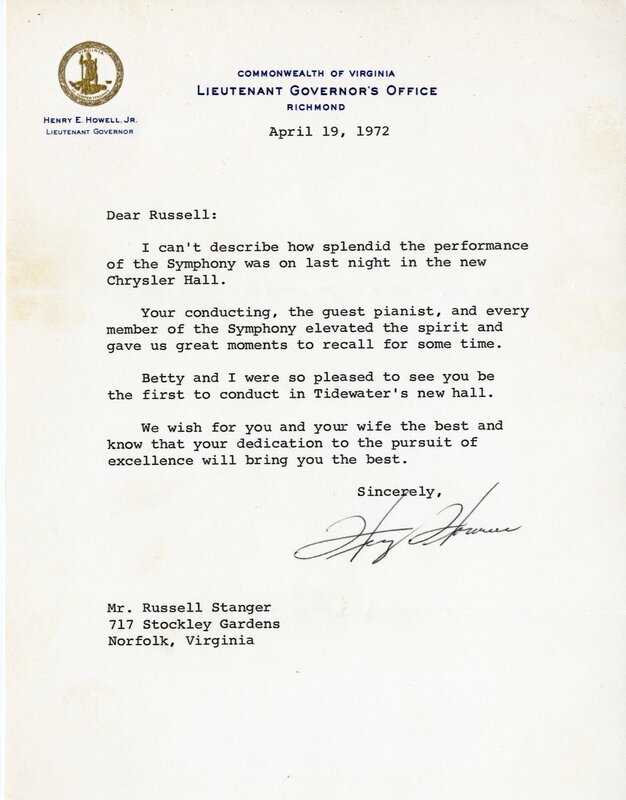 Stanger was called upon to advise during the planning and building of the Scope and Chrysler Hall, which opened on April 18, 1972 with a concert performance by the Norfolk Symphony. To celebrate the event Norfolk Mayor Roy B. Martin, Jr. proclaimed the week of April 11-18 as Norfolk Symphony Week. A number of VIPs were in attendance for the opening gala including Virginia Lt. Governor Henry Howell.