After the United States entered World War II in the 1940s, the Norfolk Division of the College of William and Mary began offering war training and vocational courses. The Technical Institute, an outgrowth of the war-training program, was established in 1945. Originally, the Institute used makeshift classrooms and temporary shops under Foreman Field. 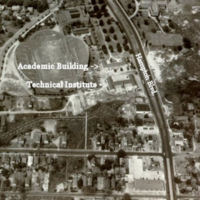 Between 1947 and 1948, the Federal Works Agency donated two wooden military-style barracks to the Norfolk Division. One became known as the Academic Building and initially housed the Division of Business Administration and later the Social Studies Department. 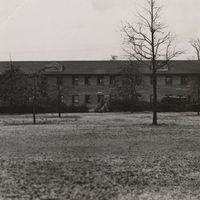 The second building became the home of the Technical Institute. The building consisted of six workshops, six classrooms, and faculty and administrative offices. It also housed the first radio station on campus, serving to train technicians and offering a full schedule of music and talk shows.

Albert I. Godden, former faculty member of the Technical Institute and Engineering Technology from 1949-1984, was interviewed by James R. Sweeney on June 11, 1976. 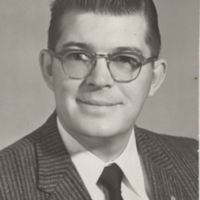 When asked about the role of the Technical Institute in the early 1950s, Mr. Godden said...

Well the Technical Institute originated, I understand, as a part of the war training program before World War II. In fact, one of the largest programs when I came here in '49 was an aircraft program, training people for the aircraft industry and for the Navy base. It grew into a technical, vocational-type training program in which the public schools sent students on a half-time basis and the student graduated from high school with a diploma and vocational training at the same time. It was approximately the largest part of the campus in '49 because naturally students were away at war. 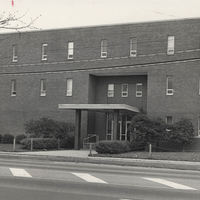 In 1959, the Technical Institute moved to a new state-of-the-art Technology Building across Hampton Boulevard between 46th and 47th streets. The new facility contained a print shop, a bookstore, and offices. A house behind the Technology Building served as a student lounge. 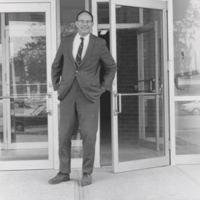 Edgar A. Kovner, former director of the Technical Institute, was interviewed on April 3, 1975 by James R. Sweeney

... There was no hope for the future until one day a state committee visiting the campus, looking into the needs for the new library, happened to bypass into the wooden shack that we used as the Technical Institute, and one of the gentlemen walked into a light fixture which was hanging too low and gashed his forehead. This slowed the group down and they began to take a look around, and they asked if this was what we operated in, and we answered yes. Whereupon the head of the commission turned to Lewis Webb and said, "Before you get a new library, you're going to have to get a new building for this outfit." So that's how we got our new building.

The old barracks that originally housed the Technical Institute were demolished in 1961.

As a result of the expansion of Virginia's community college system and the building of a technical-vocational school in Norfolk in late 1960s, technical-vocational education was de-emphasized at Old Dominion College. Some programs, such as the Dental Hygiene program, became four-year programs, while others were absorbed into other academic colleges on campus or discontinued. Until the Batten Arts and Letters Building opened in 1972, the Technology Building's classrooms and offices were used for Geography, History, Philosophy, and Political Science. After 1972, Dental Hygiene and Nursing were the primary tenants.