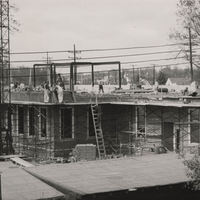 Construction of the Science Building, 1953

Construction on the Science Building began in 1953. It was completed in 1954 and dedicated in 1955. It was located between the Administration Building and the old Larchmont Elementary School at Bolling Avenue and Hampton Boulevard. After its completion, the science classes moved out of the old Larchmont Elementary School and into their new quarters. 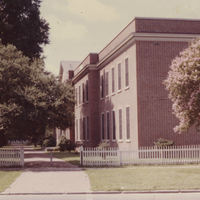 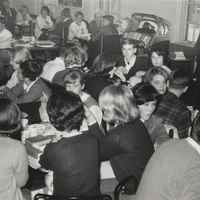 In 1956, a new wing was added to the Science Building. The addition included a snack bar, cafeteria, and a bookstore. The snack bar became known as the "new Bud's Emporium," replacing the old Bud's Emporium, which had been located in the Administration Building. Bud's closed in 1966 with the opening of Webb Center.

... I don't know whether you remember the old Bud's or have you heard about it... old building .... That was a place that was always jammed because it was small! ... At that time, it wasn't permitted to drink anything alcoholic, any alcoholic beverages on the campus. But still, the Bud's was always full and crowded.

The Science Building was home to the Biology, Chemistry, Physics, and Engineering Departments, many of which moved elsewhere on campus during the 1960s:

A renovation in 1970 converted several classrooms to laboratory facilities for the Biology and Health Sciences departments. The Science Building underwent another major renovation that included classroom upgrades in 1984-85.

In 1984, the crew of the feature film, "Shadow of the Eagle," spent four days shooting scenes in and around the Science Building and the Administration Building. ODU students and staff members were used as extras in a few of the movie's scenes. 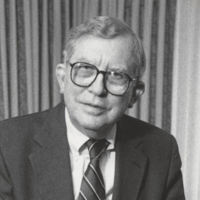 In 1996, the Science Building was renamed William B. Spong, Jr. Hall, in honor of the former United States Senator. Spong also served as President of Old Dominion University from 1989 to 1990. 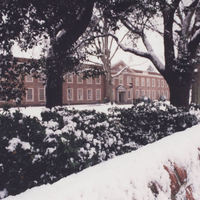 Currently (2005), Spong Hall serves as home of the College of Health Sciences, which will move to the Technology Building once its renovations are complete.