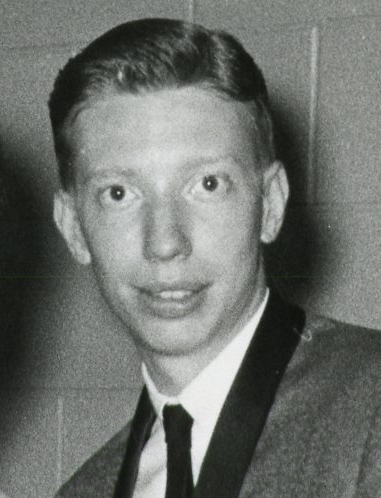 In the early 1960s Gene Loving was a DJ and music director at radio station WLEE in Richmond, VA and later moved to WGH in Newport News where his broadcasts were heard across Hampton Roads. Through his radio contacts he got into the business of booking public appearances of musical acts at venues throughout the region such as The Mosque in Richmond and The Dome in Virginia Beach (aka the Alan B. Shepard Convention Center). He named the venture AGL (A Gene Loving) Productions and though it remained a sideline to his day job in radio, the business nevertheless involved a great deal of work consisting of a broad range of activities including negotiating with talent agents, renting facilities, hiring sound workers and tech crews, arranging for transportation, obtaining licenses and permits, advertising, and so on, with each engagement generating a paper trail of contracts, receipts, correspondence and financial records which testify to the many details which demanded attention in order for such a business to successfully operate. The Gene Loving/AGL Productions Collection contains hundreds of such documents dating from the early 1960s through the mid-1970s. AGL Productions was by no means unique as there were hundreds of music producers working across the country during this time period, but it is rare to find an existing collection of records like this since most production companies either didn’t keep them or eventually disposed of them. This exhibit contains a sample of the kinds of documents found in the collection, presented in no particular order except roughly chronologically, and hopefully will serve as an invitation to anyone wishing to explore the collection in more depth. 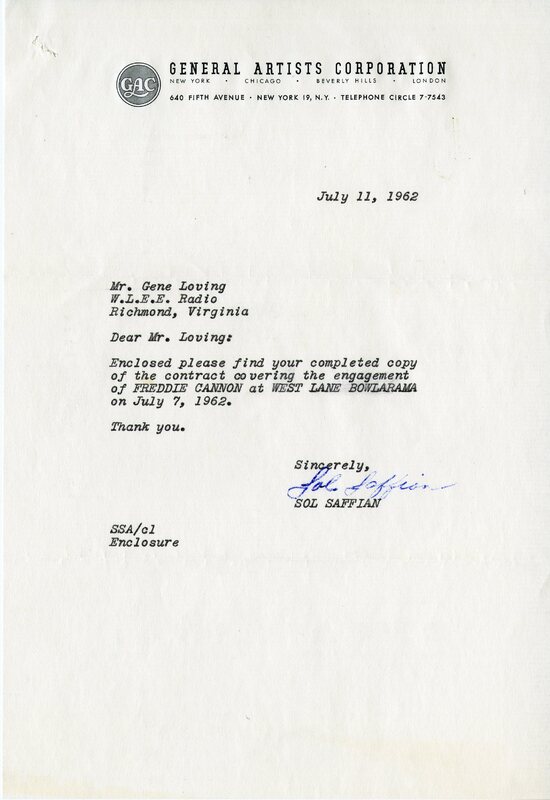 Cover letter from General Artists Corporation. (Clicking on the image takes you to the metadata page; from there you can view the document by clicking on the Files thumbnail. Use the browser back button to return to the exhibit.) 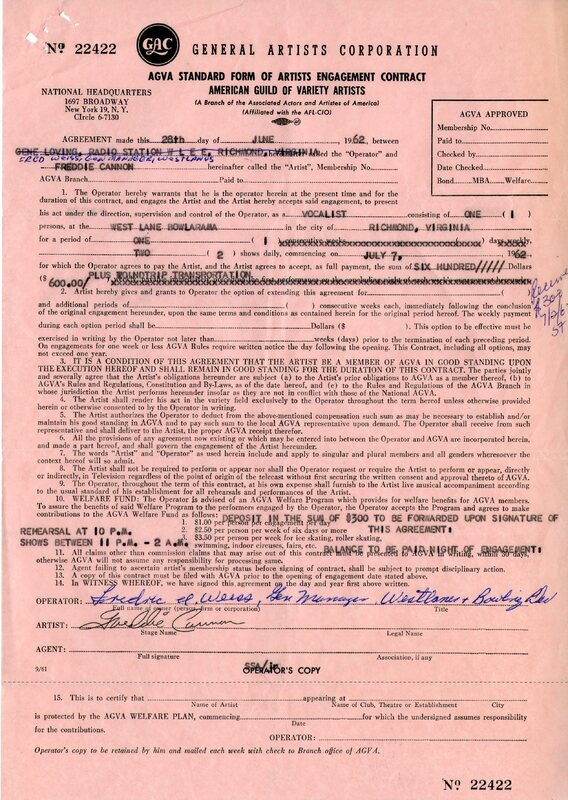 While still working for WLEE in Richmond Gene booked his first engagement, an appearance by Freddie Cannon at the West Lane Bowlarama on July 7, 1962. 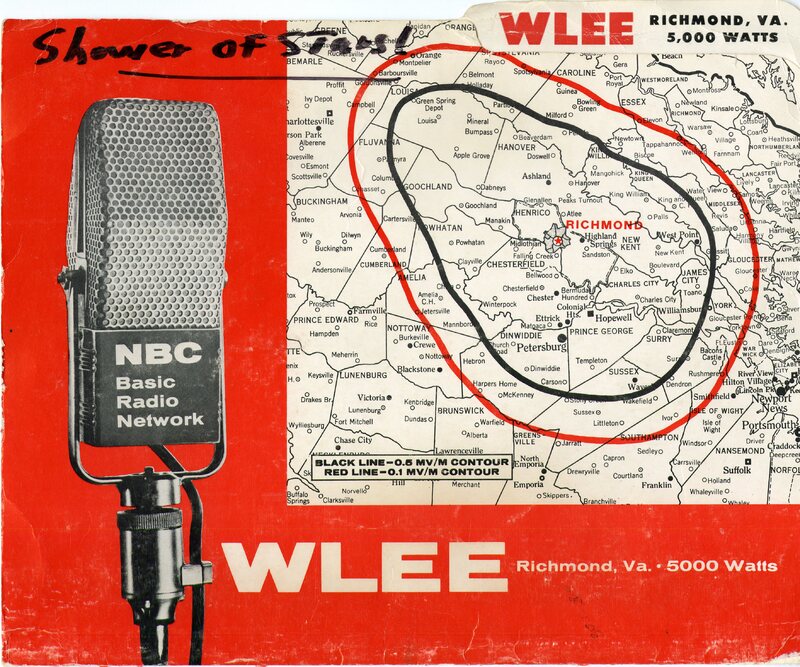 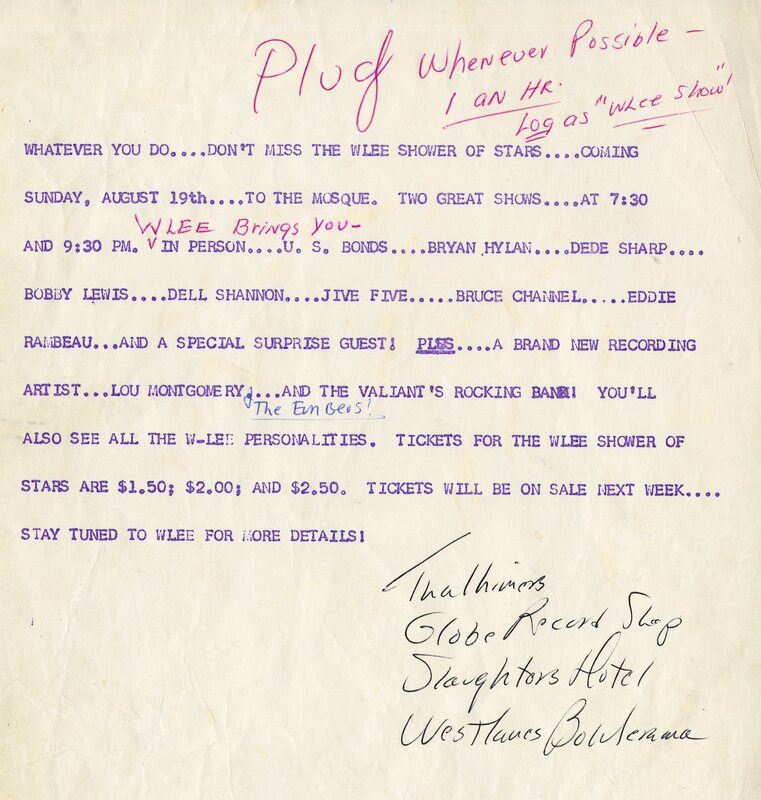 Script for a radio spot advertising the concert. 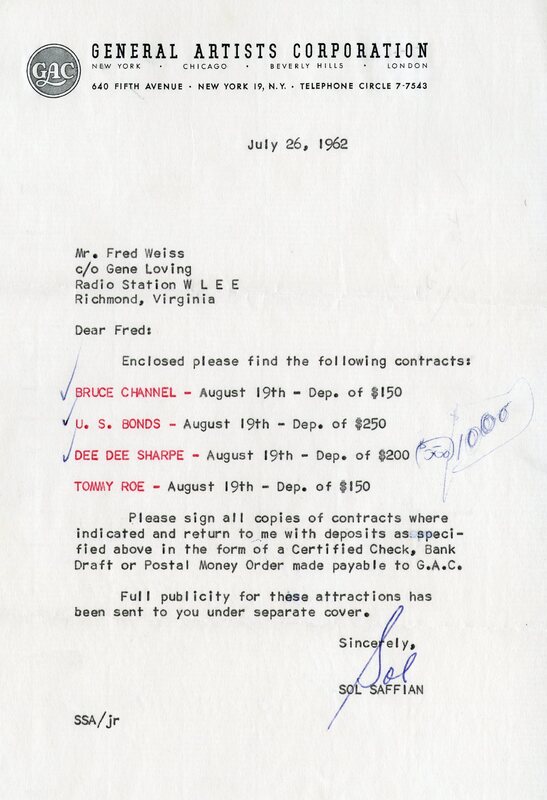 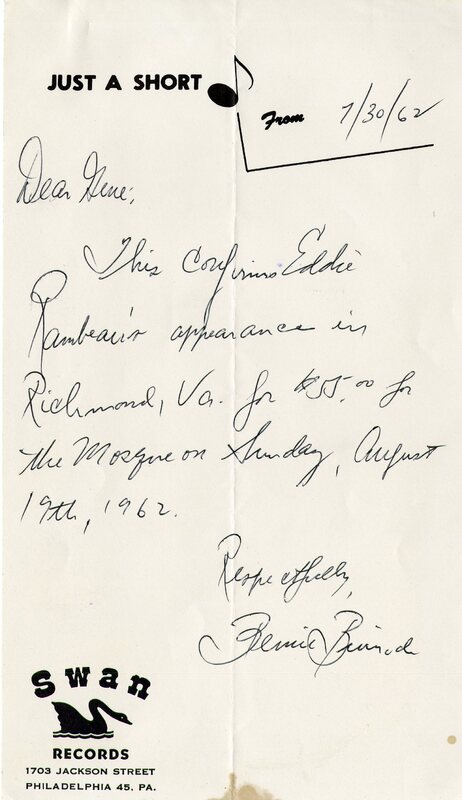 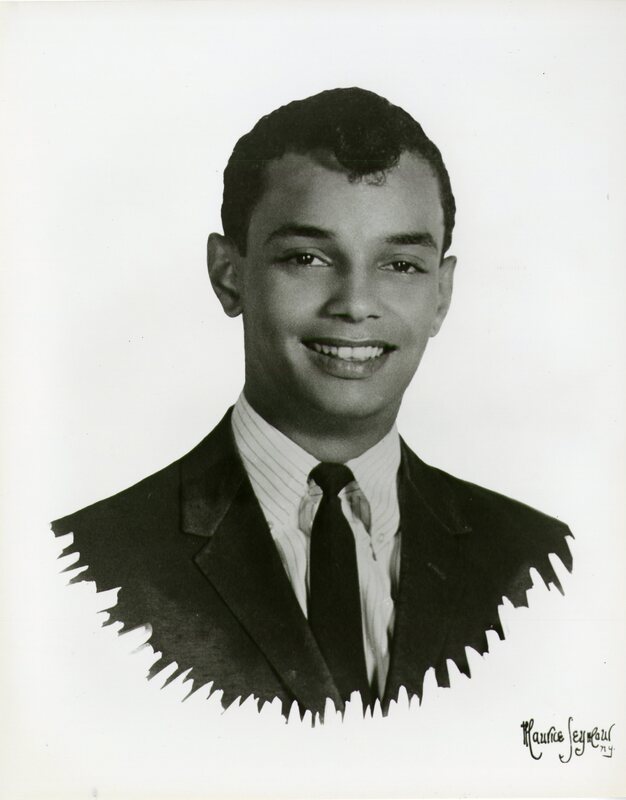 An early publicity headshot of Gary US Bonds. 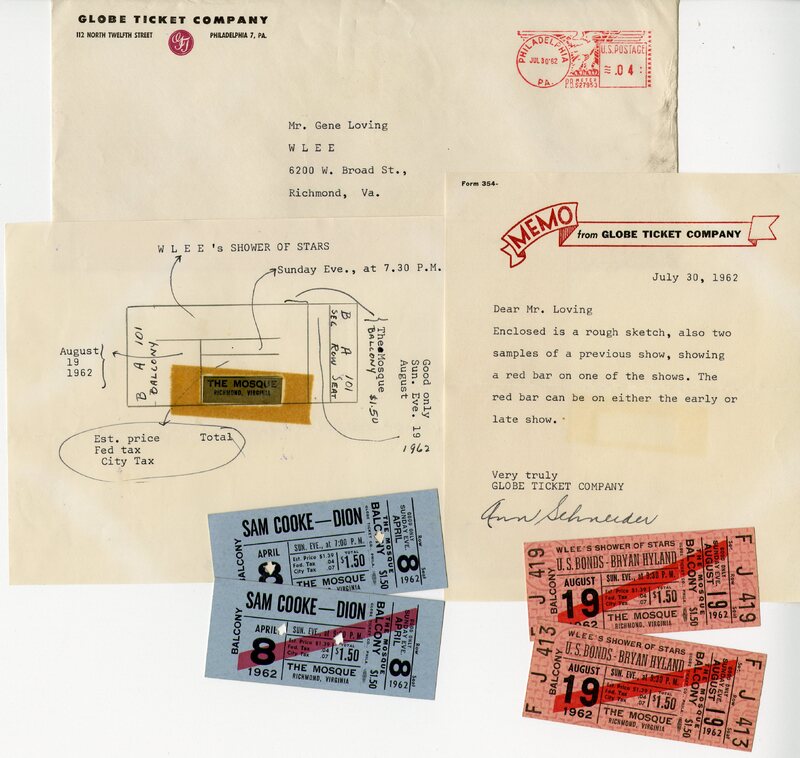 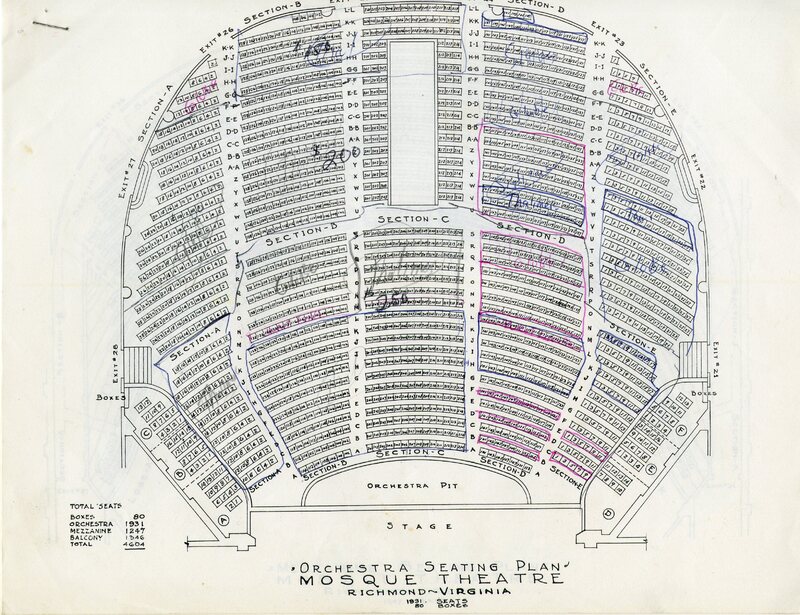 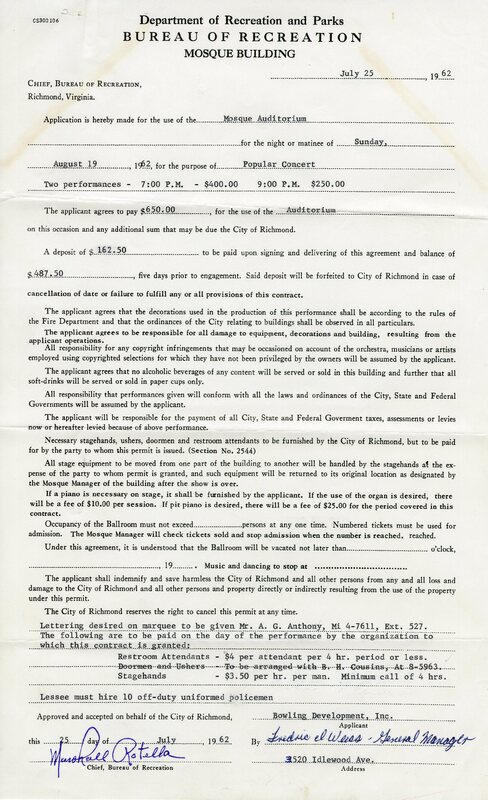 Application for use of The Mosque including payment information for building staff.

Many of the earlier concerts in the collection were performances by several artists grouped together under one bill. The WLEE Shower of Stars took place at The Mosque in Richmond on August 19, 1962 and featured Gary US Bonds (aka Gary Anderson, known then simply as “US Bonds”), Bryan Hyland, Tommy Roe and Dee Dee Sharpe among others. 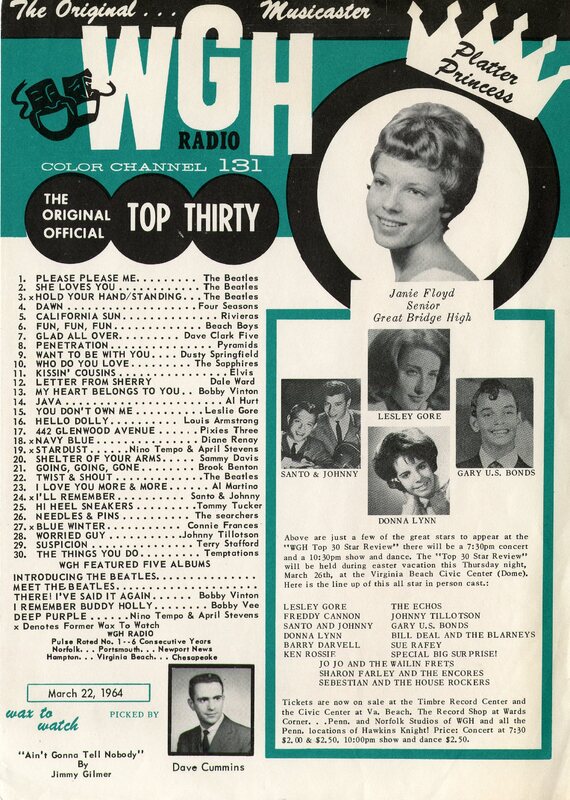 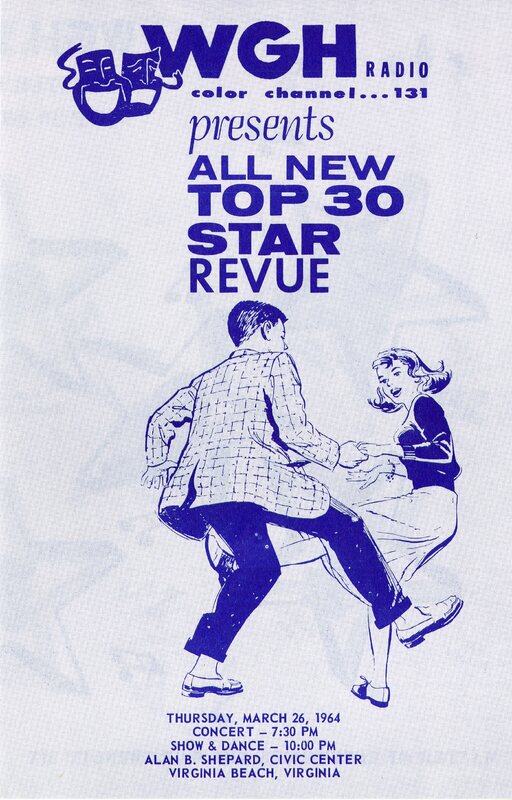 A flyer for the Top 30 Star Review. 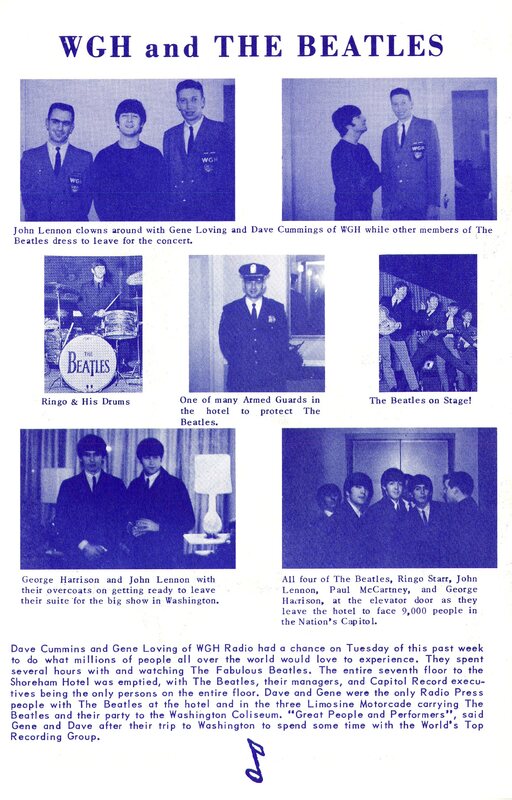 The backside of the flyer has a writeup and pictures of Gene Loving’s visit with The Beatles in Washington DC. 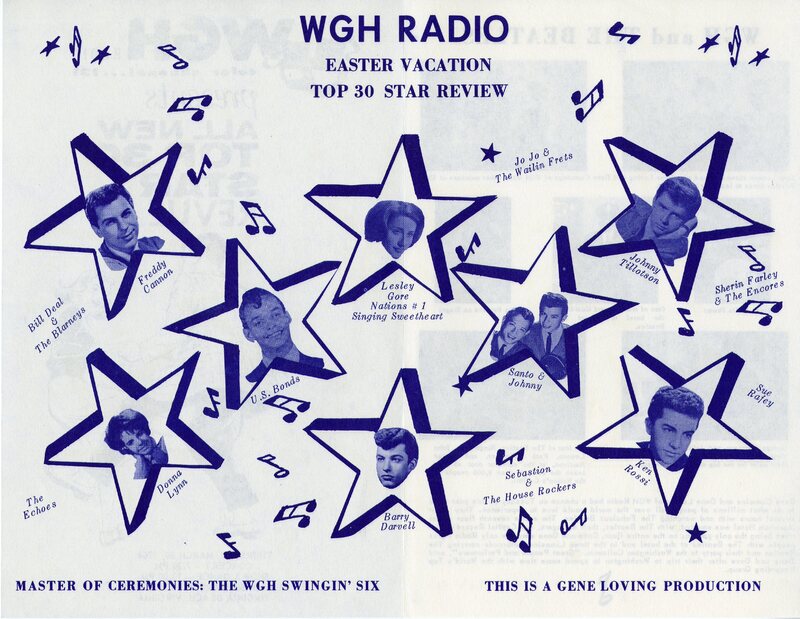 The inside of the flyer showing the concert lineup.

By 1964 Gene Loving had moved to radio station WGH. The WGH Top 30 Star Review was a concert event named for the weekly Top Thirty pop chart as featured in a handbill put out by WGH which also included advertisements for upcoming shows. Also featured was the weekly “Platter Princess.” The event advertised here took place on March 26, 1964 at The Dome in Virginia Beach.