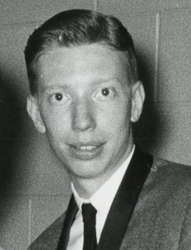 Aubrey Eugene Loving, Jr. (aka Gene Loving) enjoyed a long career as a player in the southeast Virginia music scene, both as a concert promoter and as a radio/TV personality. Loving worked his way up in the radio business as a disc jockey and music director for Richmond station WLEE. He got his start as a promoter when he booked Freddy Cannon for a live broadcast in 1962. He soon moved to WGH where he became the first DJ to pick a Beatles record as a future hit, and over the next four decades was a familiar on-air personality in Hampton Roads. Later in his career Loving turned to television where he was an early innovator in UHF broadcast, developing one of the largest chains of independent stations in United States history. He later founded Hampton Roads Wireless. He is the recipient of numerous awards in broadcast and philanthropy.

The finding aid for the Gene Loving/AGL Productions Collection can be found here: https://archivesguides.lib.odu.edu/repositories/5/resources/123